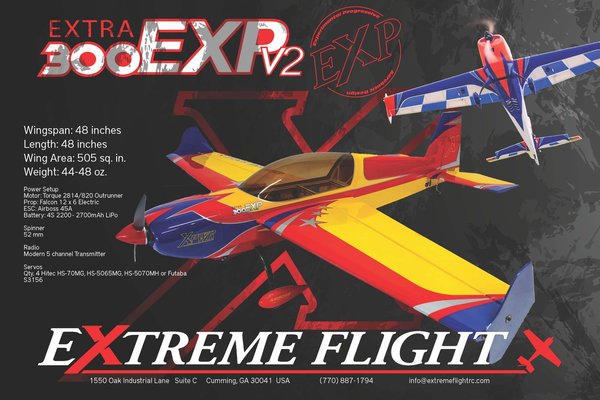 Introducing the brand new version 2 of the Extreme Flight RC Extra 300EXP ARF. Loosely based on our favorite variant of the Extra, the mid-wing Extra 300, we have taken numerous liberties with this design to produce an aircraft that is both unique in appearance and flight ability.

The designation 300EXP does not belong to a full scale Extra, but rather stands for Experimental Progressive. This name was chosen due to the fact that from its inception the Extra 300EXP was developed as a testbed for several new forward thinking design and aerodynamic concepts.

This new V2 version further refines the original concept with additional use of composites resulting in a stiffer, stronger airframe and a slight reduction in weight. The V2 Extra is a 3D Beast and super precise as well. It's hard to imagine an airframe better suited to flying 3D, XA and precision maneuvers in a confined space!