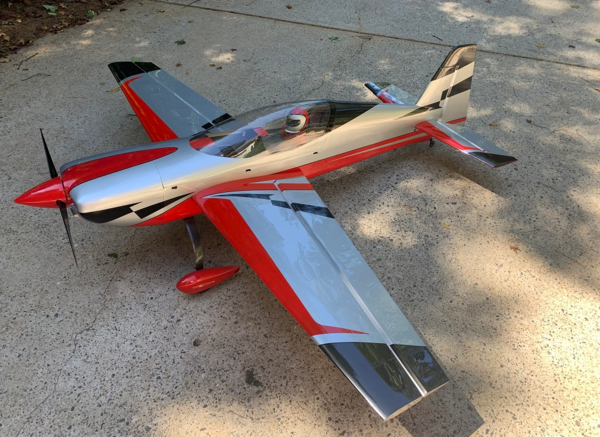 The latest effort from the design team of Walter Extra and Mirco Pecorari, the Extra NG is a stunning take on the modern aerobatic machine. Extreme Flight obtained official licensing to reproduce this gorgeous aircraft for the modeling community. Our design team did its best to retain the sleek lines, racy appearance and cosmetic details of the full scale NG will gently pulling and stretching the outline to make it an amazing flying model aircraft. Team Extreme pilot Jase Dussia describes the NG as possessing the best elements of the EF Laser and Slick 580, two aircraft that reside at the pinnacle of modern RC aerobatic flight. As such, the Extreme Flight Extra NG is a completely unlimited high performance airframe capable of dominating at the highest levels of invitational aerobatic competition.

Loaded with our latest tech, the NG is a study in state of the art RC aircraft design with the use of advanced space age composite laminates that Extreme Flight pioneered over a decade ago and has continued to refine with each new release. The NG airframe is among the lightest weight and highest strength of anything currently available. It features our quick mount wing, stab and canopy attachment system and removable rudder, allowing the NG to be assembled and disassembled at the flying field in record time and transported in a modest sized vehicle. The Extra NG features 2 gorgeous color schemes, one is the red/silver scheme from the full scale NG, the second a high visibility blue/white/cub yellow/silver scheme, both rendered in standard Ultracote fashion. G10 composite control horns, titanium turnbuckles and genuine Dubro ball links are featured in the competition level hardware package along with carbon fiber wing and stab tubes, landing gear and tailwheel assembly.